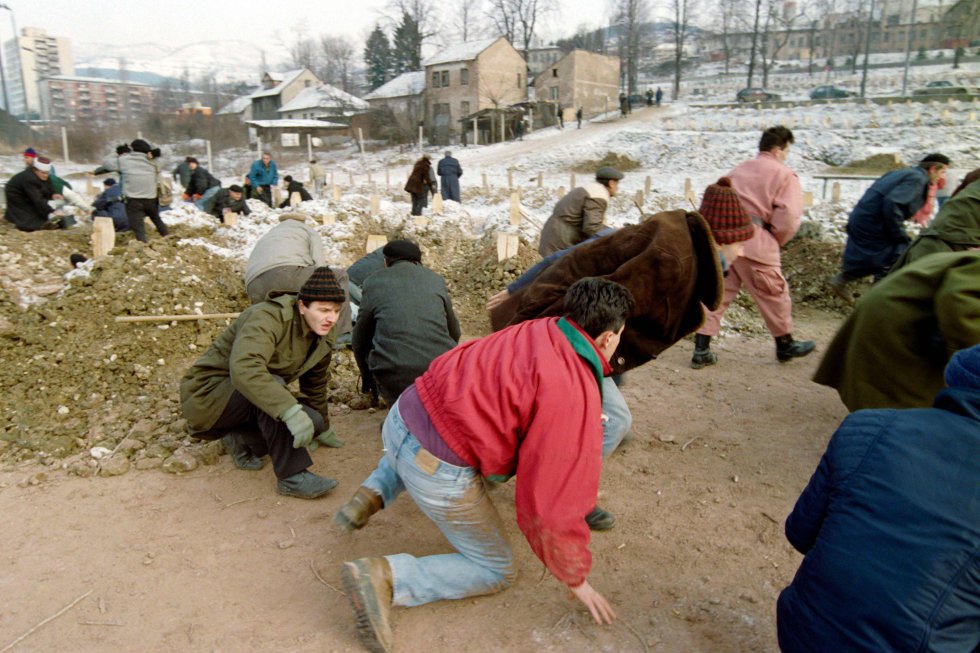 Now that we are seeing, day by day and live, the sub-zero war suffered by so many Ukrainians, those of us who knew the siege of Sarajevo, Mostar, Tuzla during his war, we can remember a few things. A first element in common: the civilians of those cities, victims of the Serbian aggressor. Civilians of all ages and conditions tend to look alike in all wars. But a first difference is, for now, the duration of the aggression. In Ukraine they have been under bombs for nine months, in Sarajevo the siege lasted more than three and a half years, from March 1992 to October 1995. And after the ceasefire achieved by NATO, they lasted several more months (in fact, until the following winter of 1996) the harsh living conditions because the state of the infrastructures, water, electricity, telecommunications, needed a reconstruction from scratch. There was almost nothing left. Another difference is that Sarajevo was surrounded, strangled, by the Serbs from the hills, and only a meager (and dangerous) tunnel built with a pick and shovel that crossed under the airport runway allowed a thread of contact with the outside. If you go to Sarajevo, you can visit. Meanwhile, kyiv has enough space to – with great danger – go out into the open to the west.

What is interesting is how the population of Sarajevo had to organize their daily lives during three winters, with temperatures below zero, without running water, or electricity, or glass in 90% of the city’s windows (the Serb bombardments also sought that plus greenhouse effect). UNHCR tried to distribute… plastic for windows! in some neighborhoods, as an alternative. The worst thing was the water or, rather, not having it. I’m talking about mouth water, personal hygiene, etc. Not to mention the toilets. Get a shower? You had to wait until summer, and go down to the river, but you were within range of Serb snipers in the hills. Cook? There was a lack of water, there was a lack of a gadget to cook on, there was a lack of food and fuel. The contraption—you can visit the war museum in Sarajevo—was made of various pieces of metal, welded together and with poor ventilation, of course, because the family used to spend the day (and night) in one room. And sleep all together on the coldest days. Oh, and the fuel! Well, very soon trees had to be cut down, and in Sarajevo there were many. But each time you had to go looking for them further from home. In what I will call “my neighbourhood”, Basharcija/Ploce, going up towards Travnik, there was a little wood. One of the emergency cemeteries was installed there, the two most important in the city (the León cemetery, and the Jewish cemetery) did not give more than themselves. As the grove receded, its wood did something to help heat the houses and make the stelae for the graves that grew up the slope. The dramatically curious thing is that by September 1995 there were only a few trees left, and then the war was over. The Bosnian President Alija Izetbegovic wanted to be buried there and a tiny mausoleum can be visited.

And of the sanitary conditions, what to say? In June 1992, French journalist Jean Hatzfeld was shot on his way to the airport and lost his leg. They managed to take him to the downtown clinical hospital, there were only a few doses of morphine left, and the patients in his section asked the doctors to give them to the French journalist. Since the Serbs of Radovan Karadzic and Ratko Mladic did not want to bother French President François Mitterrand any further (his position in that war was a monument to ambiguity), Hatzfeld was evacuated in one of the few planes that the Serbs (who also surrounded the airport) ) allowed to leave. He saved the life, but not the leg.

Speaking of the subject, the members of the United Nations forces that managed the departure and arrival flights, of the UN or of the UNHCR, were frustrated. They ended up making a kind of stamp with which —if you wanted— they would stamp your passport, and which said “Maybe airlines you book we cancel”, because at the end of the day one plane out of every four or five left. And who canceled? The Serbs with a clean shot.

Within the tragedy, in kyiv we can see sources or distribution points of drinking water or, a sign of a war in technological times, charging points for mobile phones and tablets.

The idea, returning to the underlying theme of this article, would be to carry out a mixed Sarajevo-kyiv project, which the city of Barcelona could well sponsor, to set up workshops on how the inhabitants of Sarajevo had to invent everything in order not to succumb to more of three and a half years of cold and death, starting with appliances to cook and heat a room in a house, without water and without firewood.

Pere Vilanova He is emeritus professor of Political Science at the University of Barcelona.